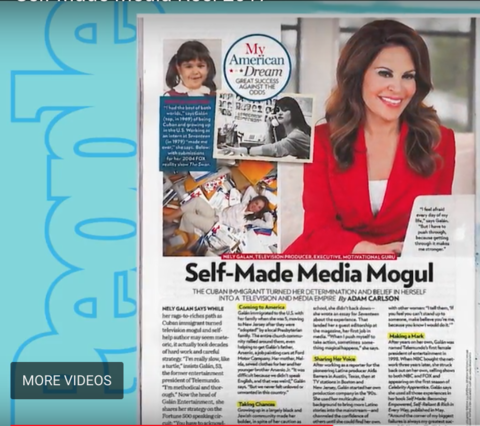 As a Latina and a self-made media mogul who has produced hundreds of television shows, headed a TV network, and generated a significant amount of income, Nely Galán ironically felt an odd sense of relief when the economy crashed in 2008, bringing many of her projects to a halt. In hindsight, Galán believes she had been feeling incongruent in her career because she was in a field where much of the focus was on achieving success, and where individuals were not valued for being their authentic selves.

By that point in her life, she had been through psychotherapy and understood how powerful it could be. After going back to school to complete a Ph.D. in Clinical Psychology with an emphasis on depth psychology, Galán realized the extent to which depth psychology provides a powerful lens for introspection and for examining ideas about diversity.

In her own Latino culture, Galán recognized that women often don’t engage in psychotherapy because there is stigma attached. Because of her connections, Galán realized she had the capacity to gather women from many different cultures together in a safe setting where they could tell their stories, many of which included experiences with psychotherapy. By founding the “Adelante Movement,” a series of free events that she hosted all over the U.S., Galán opened the door for more multicultural women to speak freely about feeling alone and needing help. “Adelante,” in Spanish, means “move forward.”

The data that Galán collected from those conversations ultimately formed the basis of her New York Times best-selling book, Self Made: Becoming Empowered, Self Reliant, and Rich in Every Way. The book offers advice, grounded in cognitive behavioral therapy, about finding happiness in many aspects of life—not just economically, but also in areas like family, love, and spirituality.

Galán is on a powerful journey to bring depth psychological applications to the wider world and to provide important and innovative opportunities for transformation in individual, group, and community work.  Listen to the full audio interview or read my latest detailed summary article via Pacifica Post