Cosmology, Ritual, and Ecology: A Message from the Kogi Indians of Columbia—An Interview with Lisa Maroski 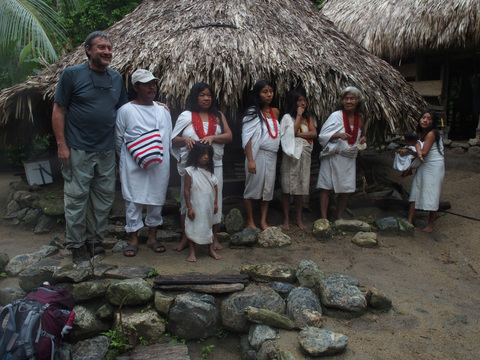 Perhaps you’ve heard of a mysterious tribe of Native Indians who live high in the mountains of Colombia, speaking only their own original language, and having little contact with the outside world. These people, the Kogi Indians, have long referred to themselves as the “Elder Brothers,” as they carry the responsibility of being caretakers of the world, helping to maintain a balance of harmony and creativity in the world. (Photo at right courtesy of Lisa Maroski).

In recent years, the Kogi have begun speaking out. They are deeply concerned that non-indigenous cultures living in the modern world, whom they call the "Younger Brothers", are harming the earth, and they want to share the message that we need to change our ways.

The Kogi have a profound relationship with the Mother Earth, whom they call “Aluna.” reports Lisa Maroski, a board member of Monterey Friends of C.G. Jung who had the remarkable opportunity to travel with a group to visit the Kogi in Columbia, to hear their message, and to see firsthand how they live and what they are asking from us.

Maroski, who shared her experiences from the journey in an interview with me, explains how the “Mamas”— the priests of the tribe—were traditionally trained. Those who were identified as being future holy people were taken into caves at just a few months of age and they remained there for several years without ever experiencing the outside world. After several years, they were finally introduced to the outside world, where everything was so much more vibrant and alive than they could have ever imagined, that they become deeply psychically embedded in a universe that is alive and animated—even objects we westerners traditionally don’t think of as being alive.

Other traditions, such as weaving, are deeply ritualistic, based on the understanding that everything in the world is interconnected. When they weave, it is symbolic, Maroski notes, and weavers maintain ritual practices like spinning around during certain points in the process to remind themselves that they are weaving the world.

Maroski’s time with the Kogi changed her. She came away with a powerful understanding of what C.G. Jung called the unus mundus, the “one world”, and the possibilities of living with a worldview that understands how everything is alive and profoundly interconnected.

We are longing for that personal connection with the Earth, she believes, and there are ways we can each take individual action to help amplify this message in the world. Whether it’s ritual acts such as Maroski describes during our conversation, or literally writing to corporations that are harming the planet to let them know w won’t accept it any longer, we each carry the possibility to honor the Elder Brother and start creating the change we want to see in the world.

Lisa Maroski is an author, editor, and playwright. She is a board member of the Monterey Friends of C.G. Jung. She traveled to Colombia with John Perkins to meet with and learn from the Kogi Indians.

Listen to the interview via Depth Insights™ at http://www.depthinsights.com/radio/Lisa-Maroski-Message-from-the-Ko... or access the audio on YouTube at https://youtu.be/IVTZcTH5w_M

Follow my blog site to receive automatic notices for new posts at http://www.depthinsights.com/blog/