Are You Creating New Rituals? With who?

Troubled sleep...restless gods conjures an image of restless, sleepless nights, twisting and turning late into the night and into the early hours of the morning. No relief in sight for those wrestling with demons within and unresolved conflicts without. Troubled sleep signals a need for willingness to make the descent into dark realms and listen to the voices of the gods!

When we resist hearing what we need to hear, typically not wanting to make critical life changes, then we…

Listening at the door of the dreaming mind

Our mind "dreams" continuously with bursts of notable activity at intervals in the night, only a few of which we notice. Like ignorant children listening at the door to adults talking, we gather little from the conversation, declaring it so much foreign language babble. Oh the arrogance of the little "self" who rules the conversation in another language nonsense, reluctant to imagine there is knowledge transpiring to which we…

I have shared postings on Dreams and Consciousness, in a tucked away folder on my site, but it isn't a "blog" and doesn't allow questions and other's thoughts... so I thought to try posting it here to see what it stirs up.

Question about Identity in Dreams
For those who don't know me, I have maintained a Dream Journal, for "3+? decades" and have used this dialogue as a growth experience and knowledge training opportunity, seeing patterns in rapid evolution,…

News just in from Opus Archives:

We certainly find ourselves living in interesting times, and our dreams are reflecting not only the challenges, surprises and graces that we find in our outer waking lives, but also what is being evoked and felt deeply in our inner dreaming lives.  Dreams are the medicines of the soul, individually and collectively.  Remember what Joseph Campbell said, “Dreams are…
Continue

The Eyes of God

Dreams are the eyes of God states a central maxim of depth psychology. I've come to understand that when we see through the eyes of the Dreamer then we cut to the chase regarding situations, relationships, ourselves. Dreams don't lie. A man, some years ago, told me that he dreamt of climbing a staircase that ascended to the heavens. There he discovered that "going up happened as I went within. I listened to my dreams and they showed me the way forward in my life. It brought changes…

Some food for thought harvested from different parts of the web about today's Autumn Equinox (September 22) and the coinciding (ie, synchronising!) first quarter moon:

1. 'Also called Mabon or the late harvest festival, [the Autumn Equinox] is celebrated when day and night are of equal length. It is a time of balance before the descent into the darkness of winter and a time to take stock of the fruits of the harvest - whether they are real fruit and vegetables you…

"In every kind of dream I am a black wolf...." So goes the provocative poem by Tina Chang entitled The Future is an Animal. It was shared with me by my daughter, Katherine, also a poet. The effect of it has lingered as images of transition and transformation emanate from each verse, reminding me that destiny is ever unfolding and that "the path goes on and on." God as intimate soul, as dark goddess, black wolf, deep calling unto deep, we awaken each day to the mysteries that the day…

Healing, Service and Our Authentic Talents

This above all – to thine own Self be true.

And it must follow, as the night the day

Thou canst not then be false to any man.

This month’s new Moon in Virgo initiates another few weeks of intense change.  So ready or…

This Blog site content contains information I have used to help me in depth conversations with others keeping informed on the latest suggestions concerning my ethical behaviours in my service work.  Content analysis of context and review of ethical postures helps me makes decisions in moral dilemmas.  Everything is simply complex, so I need tools to help me along in my calling and service to others.

Dreams of a dark goddess seem to be prolific in the sleep of sincere seekers. One after another I hear of folks wondering why a nightmare of the goddess awakens them. We so easily fall into an ego rut of wanting things to remain the same, to keep the status quo, especially regarding our spiritual outlook. Dreams of the dark goddess beckon us into an interiority and depth of consideration regarding old ways that may have worked for us in the past and no longer do so. Darkness within…

Reckoning at the 2043 Cascadia Shaman’s Convergence –

Resilience is best understood as a process. It is often mistakenly assumed to be a trait of the individual, an idea more…

Well I'm sitting here typing all excited, having discovered a treasure of a lecture - it's tucked away on the Washington National Cathedral website and is from 2005, but is timeless :)

In this lecture, Marion Woodman leads an exercise that gives a taster of her work; discusses Jung's ideas about body and soul; and explains what led her into Jungian analysis.

She also tells one of the stories…

I've been reflecting on the concept of God as intimate soul. William James, father of American psychology and pioneer in psychology and spirituality, proposed this idea as a way of expressing a more personal and practical understanding of what organized religion has described essentially as an outer religious reality. Something so far off and away cannot be as close or real as that which lies within the human soul, in fact is one and the same experience as soul herself. Yes, I did say…

Joseph Campbell on Following the Song 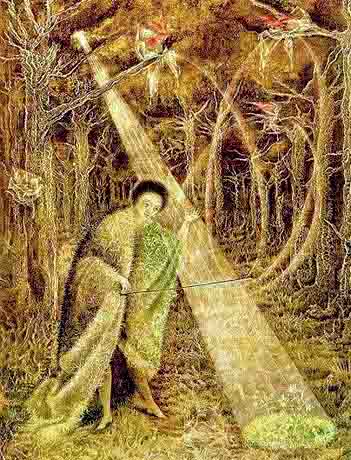 ’There’s an interesting paper, The Shaman from Elko, in thefestschrift novel volume for Joseph Henderson, a psychiatrist in San Francisco. It’s an account of a woman in West Virginia, in the coal mining areas there, who in her late sixties had the dreadful feeling that she had lost life, that she had never lived life, that there had been a life for…

How Jung Defined his Work... 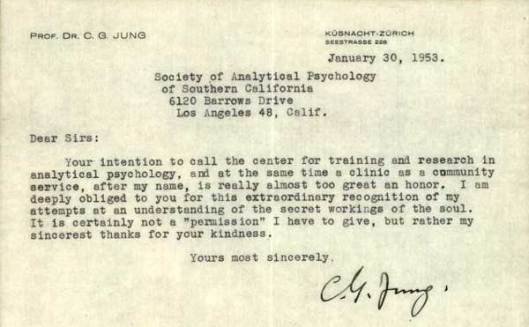 'Attempts at an understanding of the secret workings of the soul.'

The Heart of the Matter: A Dream and Synchronicity

“The heart is a living symbol. With conviction, we speak of the 'heart of the matter' to refer to something essential or central without which an issue could not exist.” ~ from the article “Heart” ARAS - Archive for Research in Archetypal Symbolism