The Indigenous Psyche: Changing Woman and an Artist in Dialogue 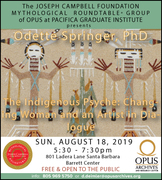 The Indigenous Psyche: Changing Woman and an Artist in Dialogue

Who is the Navajo Deity Changing Woman and why is her mythology obscured? In this presentation, Odette Springer, PhD, will explore the many mysteries of Changing Woman and Na’ach’aanhi, the Navajo term for an artist, or “maker of things.” By engaging Changing Woman through the therapeutic technique of active imagination, Springer re-imagined her own disembodied creative spirit that had been severed by trauma and found that, as a symbol of continual regeneration, Changing Woman offered a balanced system to the fragmenting nature of the creative process. It is Springer’s hope that sharing her own rediscovery of voice and body will encourage today’s women and men to draw from Changing Woman’s invaluable gifts and inspire their own myths in the making. Join us as we explore this quintessential feminine Goddess through myth, music, and metaphor.

Odette Springer, PhD, is a writer, independent film producer, and classically trained musician. She has been a singer/songwriter and composer for over 25 films for such companies as HBO, Showtime, Paramount Studios, and the Disney Channel, as well as numerous international television networks. Her first feature documentary Some Nudity Required premiered at Sundance and immediately secured worldwide distribution. In addition to publishing her poetry, she has published academic essays in several anthologies. Her dissertation for Pacifica Graduate Institute focuses on trauma and the creative process and is entitled Changing Woman: Calling The Feminine Home.

RSVP for The Indigenous Psyche: Changing Woman and an Artist in Dialogue to add comments!