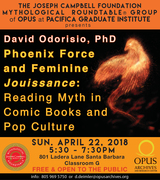 Mythological material is exploding in popular culture through the medium of comic books, graphic novels, and contemporary superhero cinema. What do these stories have to say about the potential for re-birth? In ancient mythology, the Phoenix represents a symbol of great destructive power, but also life-giving rejuvenation. This presentation will examine the "continuing incarnation" of the archetypal "Phoenix Force" over a 35-year span of X-Men history, including her many retellings, resuscitations, and reincarnations. Reading Phoenix, and her sinister emergence as "Dark Phoenix," alongside a combined historical-critical and feminist depth psychological lens, reveals the enduring cultural legacy - and specificity - of a character that has evolved over decades, largely through the imagination of male authorship. Viewing Phoenix through the category of sexual difference raises questions regarding comic cooks, male fantasy, and the ability of female characters to carry, withstand, and even subvert the male gaze through the erotic subjectivity of what Lacan referred to as "feminine jouissance." The presentation will include reflections on the forthcoming film, X-Men: Dark Phoenix, and invite the cultural interrogation of "Why Phoenix? Why now?"

David M. Odorisio, PhD, is the founding Director of The Retreat at Pacifica, a depth psychologically-oriented retreat center on the campus of Pacifica Graduate Institute, as well as Adjunct Faculty in Pacifica’s Mythological Studies MA/PhD program. David’s academic interests focus on the hermeneutic intersections of Depth Psychology and Religious Studies, particularly in the areas of psychoanalysis, Jungian psychology and comparative mysticism.  David has published in the Journal of Transpersonal Psychology, Quadrant,Philosophy East and West, and the International Journal of Transpersonal Studies, among others.  He is co-editor of the forthcoming volume, Depth Psychology and Mysticism(Palgrave Macmillan, 2018). Visit him at:  www.ahomeforsoul.com