ILLUMINED: Mandalas and Mythos Across Art and Time 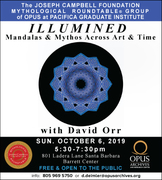 ILLUMINED: Mandalas and Mythos Across Art and Time

“A mandala is the psychological expression of the totality of the self.” — C.G. Jung

For the ILLUMINED series, artist David Orr photographs a mystical, sacred, or philosophical text—often a one-of-a-kind hand-printed and illuminated manuscript—then digitally recombines the results into an abstract form which alludes to each worldview and beyond. The end images take on a mandala (sanskrit, ‘circle’) form: circular, with elements configured around a center point. Carl Jung noted that the mandala appears in virtually every culture; indeed, in his introduction to The Red Book, Sonu Shamdasani noted that Jung “held that the mandala represented one of the best examples of the universality of an archetype.” This method of displaying information—for purposes both sacred and secular—has been used in metaphysical representations of the universe (Buddhist thangkas, Alchemical diagrams, the pythagorean monad) and contemporary data rendering (orbital patterns, CERN particle diagrams; web infographics) seemingly as long as humans have been depicting it. Join David as he discusses the mandala form’s visual impact across cultures, across beliefs, and throughout time.

David Orr is a visual artist based in California. He exhibits his work internationally and has spoken about his work at a wide range of venues including Cal State LA, the College of Physicians of Philadelphia, Death Salon, Dublintellectual Ireland, The Director’s Guild of America, The Mütter Museum, The New School, Parsons School of Design, Reed College, UCLA, and The Philosophical Research Society (PRS). David served as curator at PRS and established the PRS arts program and Hansell Gallery. He is a member of The Long Now Foundation.

RSVP for ILLUMINED: Mandalas and Mythos Across Art and Time to add comments!