The sun-hero has a dual relationship to the Great Mother, as exemplified by Heracles; his name means Glory of Hera, yet the goddess drives him to madness. He sets out on the mission to break free from the bonds of the Great Mother, to face her magnitude, ready to draw his sword in combat with her however awesome she seems to be, and to enhance his ego-consciousness. The sun-hero, while not always able to fulfill the entire mission of his journey, works towards replacing id and the unconscious with ego. He must abandon the comfort and the security of the kingdom of childhood, about which Jung writes:


For him who looks backwards the whole world, even the starry sky, becomes the mother who bends over him and enfolds him on all sides ... As such a condition must be terminated, and as it is at the same time an object of regressive longing, it must be sacrificed in order that discriminated entities - i.e., conscious contents - may come into being.(1)

On his way to consciousness the hero encounters monstrous and malicious obstacles that, as Jung says, rise in his path and hamper his ascent, wearing “the shadowy features of the Terrible Mother, who saps his strength with the poison of secret doubt and retrospective longing.”(2) He risks being devoured by the Earth Mother, destroyed by the gods, to burn in the flames of passion set afire by the nymphs, or die in battle with his competing Martian warriors. His world is patriarchal, goal-directed and lawful, thus he may lose direction and plunge into unconsciousness, teased and tantalized by the feminine seductress intruding from afar, as became the tragic fate of Samson. 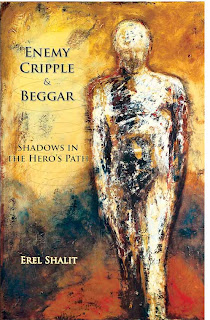 It is the sun-hero’s undertaking to break away, to free himself from the archetypal world. Simultaneously, as part of his mission, he must gather the strength required to bring the very same archetypal energy into the ego and human consciousness. Thus, the hero has one foot in divinity, one in the world of mortals. It is the hero’s task to dismember the archetypal energies and transpose them as increasingly human complexes into the personal world and the realm of the ego. This is what Prometheus does when he brings fire to man. His name means forethinker; the Promethean fire is the capacity to plan the use of that natural transformative energy, fire, for the benefit of mankind, to create consciousness and acculturation, heating and cooking, creating new materials and fresh ideas.(3) But also when the complex has become autonomous, split-off from consciousness and detracting energy from the ego, the hero is called for. The man who compulsively clung to a job far below his capabilities because of his fear of losing it was constantly threatened by dismissal until he gathered his strength to fight the complex that nearly destroyed him.

The sun-hero may be the obstinate two-year-old who repeatedly says no and no to being dressed, “I dress.” Or the five-year-old who pulls the hero’s phallic sword with which he fights the beasts within—as they are projected upon the little kindergarten-brutes of the real world without. The sun-hero is unmistakably masculine, a He, whether a boy or a girl.

The solar hero brings something new, something formerly unknown into the consciousness of the individual or that of society. By means of the adventures of the sun-hero, man has, for instance, accomplished scientific achievements and expanded geographical boundaries. The solar aspect of the hero pertains to patriarchal consciousness. With his sword, the hero cuts and divides, which is structurally essential for the establishment and expansion of consciousness.

But there is a lunar aspect or phase of the hero’s journey as well, which may likewise unfold when the hero abandons the conventions of the royal throne and the safe rule of ego, when he stands up against and turns away from collective consciousness. This is the case, for instance, with Buddha, whose way is enlightened by reflection rather than by the splendor of the sword. It pertains to conceiving, rather than “deliberate doing,” and, says Neumann, “time must ripen, and with it, like the seeds sown in the earth, knowledge matures.”(4)

This is the moon-hero. He, or in fact She, because it pertains rather to the feminine, whether in man or woman, ventures into the dangerous paths, the forests and the rivers, the hills and the valleys, the labyrinths and the netherworlds, the pandemonium, the chaos and the torment outside the boundaries of collective consciousness, beyond norms and conventions. She is maybe not the skillful goal-directed archer Apollo, but rather his twin sister Artemis, the hunter goddess roaming in the wilderness and the forest, armed with silver bow and arrows. This may be the sense of drifting around the outskirts of town, sneaking into backyards, to hike around in foreign places in the geography of the world or in the psychography of the soul, learning “how to observe nature, the way it grows and changes.”(5) It is dangerous; as happens to Artemis, by mistake, you may kill your loved one, or if you come too close you may be transformed into a stag, because it is an oscillating journey between death and rebirth, waxing and waning, appearance and disappearance, love and disaster, reflection and deflection, healing and wounding. The ground easily quakes, and on winding roads and behind thorny bushes the forces of love and madness, pain and desire, despair and anticipation struggle with savage ferocity. The lunar hero pertains to relationship and unification, but breakup and falling apart, as well.

The hero’s lunar quality refers to the mirror and reflection, rather than the sword and division. As we shall see later, Perseus is equipped with both.

In its lunar aspect, the hero does not attack the unconscious. It entails a conscious turning towards the unconscious, quietly and humbly awaiting what in the course of time arises and unfolds in the hero’s reflective mirror. As Campbell says:

The mirror, reflecting the goddess and drawing her forth from the august repose of her divine non-manifestation, is symbolic of the world, the field of the reflected image. Therein divinity is pleased to regard its own glory, and this pleasure is itself inducement to the act of manifestation or “creation.”(6)

The following is the dream of a sixty-year-old man, slowly finding his way home to himself after having “been away” for a long time, during an extraverted career:

I feel an urge to return home. I have been away for a long time. As I get home, I see that a man sits on a chair in the attic, watching the dark sky through a telescope—there is a big opening in the roof. He calls me to look, and I try to look carefully through the telescope, but I see nothing. I turn and turn the telescope, yet, I can’t see anything. He shouts and yells at me and I feel very embarrassed, and he tells me angrily to go and sit and wait next to a little girl who sits on a bench. She looks like she is in a dream state, just looking up at the sky. First I look at her, and then I lose the focus, and like her I just look at the dark sky, and then, suddenly, a very bright star shines far far away but very very clearly, and then I see the moon, so close, almost as if I could touch it.

Naturally, the lunar aspect of the hero is closely related to matriarchal consciousness, as elaborated in depth by Erich Neumann.(7) Queen Jocasta, Shining Moon, as representative of the feminine side of consciousness, has been discussed elsewhere.(8) However, Neumann is mainly concerned with matriarchal or moon-consciousness as something preceding patriarchal consciousness, pertaining to “enchantment and magic, ... inspiration and prophecy” rather than “its recurrence in the psychology of individuation, which is a reappearance at a higher level, as is always the case where, in the course of normal development, we again encounter something already experienced.”(9) I believe the lunar and the solar elements constitute complementary aspects of the hero and his/her journey, even if the one may precede or dominate the other.
In fact, as regards the lunar aspect of the hero’s journey, he naturally ventures into darkness only as the sun sets, rather than at dawn. Yet, the hero needs to be equipped with some of the day’s light to withstand the night’s depressive darkness, and with summer’s warmth for the cold loneliness of winter not to overwhelm him.

He travels at night-time, west to east, in the reflective light of the moon rather than in the unambiguous light of day. “The alchemical work starts with the descent into darkness (nigredo), i.e., the unconscious” says Jung.(10) Only thereafter “one arrives at the east and the newborn sun,” says Edinger.(11) Ayala, a forty-year-old woman, dreams:

It is midnight, midsummer night. I am barefoot, walking from the sea eastward, on a thorny field. My feet hurt, I am bleeding. Then, suddenly, a path opens up, crossing the field in the centre, dividing it in two, lit up by the light of the moon. As I walk along, still feeling the pain in my feet, a man suddenly appears from the dark and blocks my way. He is religious, completely shrouded in his Tallith [the prayer shawl], even his head is covered. He barely notices me, and he does not move to let me pass. I have to stop and wait, and listen to him reciting a prayer. I look at him as he prays, and very quietly he looks at me, in a warm and kind way. I feel his quiet prayer fills me up within, and he then blows the shofar [the ram’s horn], and I feel a wave of excitement.

While the dream was experienced during an afternoon nap, it takes place during summer’s brief night. The dreamer is guided along her path by the moon. The peripeteia occurs when her road is blocked, but she need not actively struggle with her adversary. Rather, this woman, who had experienced a deep narcissistic wound due to lack of adequate mirroring in early childhood, allows herself in the dream to be mirrored by the religious man’s chanting prayer. Jung says:

Christ, or the self, is a “mirror”: on the one hand it reflects the subjective consciousness of the disciple, making it visible to him, and on the other hand it “knows” Christ, that is to say it does not merely reflect the empirical man, it also shows him as a (transcendental) whole.(12)

This article by Erel Shalit is an excerpt from Enemy, Cripple, Beggar: Shadows in the Hero’s Path.

Erel Shalit is a Jungian psychoanalyst in Ra'anana, Israel. He is a training and supervising analyst, and past president of the Israel Society of Analytical Psychology (ISAP). He is the author of the recently published novella, Requiem: A Tale of Exile and Return, and several other publications, including The Hero and His Shadow: Psychopolitical Aspects of Myth and Reality in Israel and The Complex: Path of Transformation from Archetype to Ego.