Every once in a while, a term emerges on the horizon of my awareness which I find strikingly beautiful. In this case, it is the “image-making capacity of soul.” The language of soul is symbol, and symbol shows itself in image—including dream images, fairy tales and myth, or even art, Mary Harrell, Ph.D., explains in her recent book, Imaginal Figures in Everyday Life: Stories from the World Between Matter and Mind. Ultimately, this language of images is soul manifesting in a way people can understand, and without that image-making capacity, people can’t come to terms with the unconscious, Harrell insists.

What inspired Mary to write the book, I wondered when I sat down with her to discuss it not long ago. Mary, a Jungian-oriented psychotherapist who earned her degree in the Clinical program at Pacifica Graduate Institute, began by sharing a an unusual and surprising story. When she was 13 years old, her mother died. Two years later, a self-described “intuitive, inward-leaning spiritual child,” she experienced a “figure” that came into her bedroom, an “incorporeal” being that became more and more embodied as she moved toward Mary in order to hand her a box. Mary knew that the box was meant to be a gift, she explains, but at just 15 years of age, she was understandably terrified. Instinctively, knowing her sister was asleep in another bed in the same room, Mary threw her arms around her sister. Since her sister had a real body, Mary believed that would stop that ethereal woman from approaching her—and indeed, the woman disappeared. 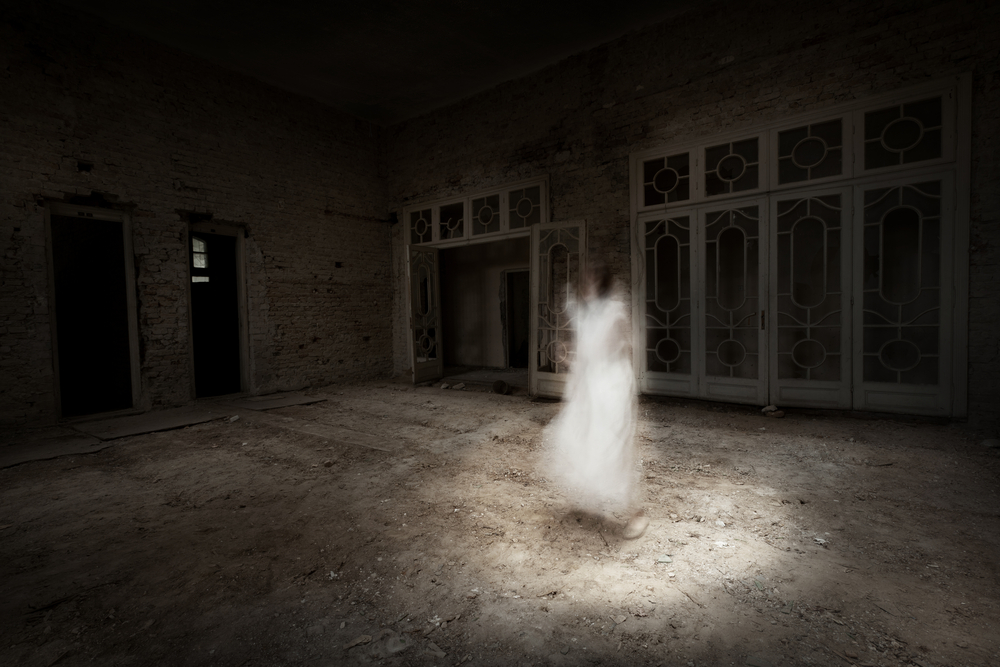 Mary had no context to help her understand how to deal with “ghosts,” nor anyone she could talk to about it, she told me—even though that ghostly woman continued to appear to her for 22 years. In order to cope with the terrifying visits, Mary “altered her consciousness” as she explains it, often by turning on lights or putting her arms around her husband in her 20s. All of this woke Mary up from that altered state which allowed the woman to appear, and eventually the woman stopped manifesting.

Mary began her doctorate at Pacifica in her 40s and discovered analytical (or depth) psychology offered a powerful lens which enabled her to investigate with “a sense of reality and scholarship” such unusual phenomenon that is often dismissed in the mainstream. She came to realize she wanted to spend her professional life studying about imaginal beings such as the one she had experienced for much of her adult life. Such beings live in the realm between matter and mind, Mary suggests. They are neither fully of the physical world nor of the mind, a realm which philosopher and scholar, Henry Corbin (and others), called the mundus imaginalis. One can enter that realm by allowing an altered state of consciousness.

There are seven stories in Mary’s book, Imaginal Figures in Everyday Life. At Pacifica she found a framework that could deepen the experiences she had, particularly through an understanding of Jungian archetypes. Archetypes have two ends to a spectrum, a physical end and a spirit end, according to Jung. Each of these had a place in Mary’s experience. The spirit end was the “angel” that visited her, and the physical end was the sensation Mary felt when the figure manifested in Mary’s room. Additionally, Mary visually perceived the figure as a Madonna who had a box for her.

Years later, Mary realized it was the image-making capacity of soul that allowed her to perceive the box, and to understand that it represented the gifts a mother would give her child. She credits her education at Pacifica with helping her not only understand the concept of archetypes, but also that each individual experiences archetypes in different ways. Mary holds the belief that, when working with the imaginal, one way to know that you’re not making something up is that there is a deep experience of resonance, a visceral feeling in your body that testifies there is something real at work there. As the stories Mary was writing and their archetypal connects began to resonate with her, Mary knew she could pierce a veil between worlds and make some sense out of the images in the form of a book for those individuals who are open to this invisible realm.

In the Age of Enlightenment, beginning around 1685, Mary told me, a new paradigm emerged in which “science became the great arbiter of legitimacy.” Science insisted certain “truths” might be legitimized if we looked at them through the lens of science, effectively objectifying whatever was under our regard. If we investigate something and it doesn’t fit under that model of reality, she states, it risks being cast aside as something we “made up.”

We are all prone to discount such experiences with the imaginal realm simply because they don’t fit the model of reality to which we tend to adhere, when in reality, in such events, we are experiencing something that lives in that cusp between conscious and unconscious. As a psychotherapist, Mary often invites clients to keep a journal of dreams because, as she points out, even though she and the client are speaking together through the conscious parts of themselves, the unconscious parts of each are also in dialogue. Individuals who have a sufficient amount of “psychological maturity” seem to take to depth-oriented work like a fish to water, she insists, and they discover tremendous richness if they’re willing to take advantage of doing the work.

On the other hand, I note that Robert Romanyshyn, author and now Professor Emeritus at Pacifica, has referred to Mary’s work as a “therapy of culture,” and I ask Mary how her ideas can be applied to our society. Click here to read the full post and get the link to listen on Paci...

or Watch the interview as a video