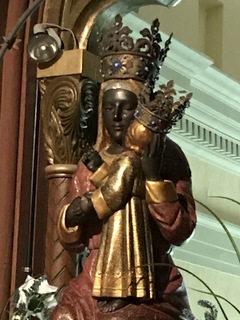 Sandplay therapist, Judy Zappacosta, MFT, first became interested in the Black Madonna at a suggestion from Dora Kalff, founder of Sandplay therapy, to visit one of the mysterious iconic figures in Einsiedeln, Switzerland. Zappacosta was immediately drawn into the “silence and dark interiority of the Black Madonna, and has made an extensive exploration of the history and symbolism associated with her.

In this interview for Depth Insights™, Zappacosta reveals the powerful and evocative significance of Black Madonna figure from a Jungian and depth psychological perspective, and shares how she can impact us both individually and collectively. Zappacosta is co-leading a 14-day pilgrimage to Black Madonna sites in Northern Spain in May, 2018.

Judy Zappacosta, MFT, is a Certified Sandplay Teacher and Sandplay Therapist of America, (also known as STA) and the International Society for Sandplay Therapy, the ISST. She has maintained a private practice for adults, children, and families on the Monterey, California, coast for over 30 years. The focus of her practice is Jungian Psychotherapy, Sandplay, Dreams, and the integration of Psyche and Soma. She consults and supervises therapists using Sandplay and publishes and teaches both nationally and internationally. Judy was trained in Sandplay by Dora Kalff, the founder of Sandplay, and she completed the Body, Soul. Rhythms Leadership Training Program with Marion Woodman Foundation. She teaches summer programs for caring for the soul offering two-week intensive for Sandplay training in Switzerland and pilgrimage trips to Black Madonna sites in Northern Spain and soon Southern France. Learn more about Judy Zappacosta and the 14-day Black Madonna Pilgrimage at CaringForTheSoul.org

Get more details and links to LISTEN or read the full TRANSCRIPT at http://www.depthinsights.com/blog/symbolism-of-the-black-madonna-a-...

The Black Madonna is a deeply appropriate icon for Jungians to study, and possibly embrace.  She is “the dark shadow” of European paganism, driven underground by repeated forced religious conversions, carried out violently by various Christian pogroms.

My first few years were spent as a war refugee in war torn Europe.  I learned the real meaning of the Black Madonna, known to Poles as Our Lady of Czestochowa, while marching in a religious procession in Belgium, a few years after the end of WWII.  Poles were aware that Poland had been invaded twice during WWII: once by Germany In the first half, and later by the USSR in the second. Poles feared a Soviet power play across the rest of Europe. The USSR had proven its military dominance as it swept over the Nazi war machine into the heart of Germany, where it stopped temporarily. In their hour of need, desperate Poles turned to their deepest faith for comfort. They gathered at night to sing and pray in religious procession to a local sacred site.

The procession was organized by the church leaders, and the priest and his altar boys led the way, and the singing. We marched huddled together at night, in the narrow, cobbled Belgian streets. Our candles kept blowing out, and I was so small that I was often trampled or crushed by large adults. The singing stopped, the priest said many long words, and then he and his altar boys with the crucifix disappeared.

Some of us were starting to leave, when the singing started again. Some men brought out a huge picture of Our Lady of Czestochowa, with many colourful banners, and more candles.

Our column began to move forward, led by a woman’s voice singing songs I had never heard before. She was joined by her sisters, who gave new energy to her voice. They called, and the column responded over and over again as we moved ahead.  Their voices were now energized and impassioned, as they implored their true goddess, for divine intervention.

The singing that was led by the priest and his entourage was dutiful but uninspired. The singing now was powerful and from the very soul. Women marched side by side, arm in arm, voices raised in anger at the destruction of war, and having to clean up men’s messes, and rebuilt their families, [just so this can happen again when men get bored with peace. …my words]

Pre-Christian Poles were pagans and animists. They worshiped the elements, and forces of nature that were part of their daily living: sun, wind, thunder, rivers, marshes, trees, rocks. They had formed long term relationships with nature, as well as the unseen world around them through their tribal: shaman, sages, and healers.

When Christianity attacked and eliminated most naturally occurring, competing religions throughout the European empires, they managed to destroy some, but a few went underground. In places of religious persecution there emerged the “double lifestyle” as protection for those minorities who were being persecuted but wished to practice the old faith.

Europe’s Black Madonna with child predates Christianity, and is indeed mother Gaia, or the Earth goddess from which all living things get their lifeforce. As the true divine feminine, she is the source of life, and her child represents the cycle of eternal life in: health, prosperity, easy childbearing, eternal love and compassion for all.