She’s certainly not about the ordinary business of life 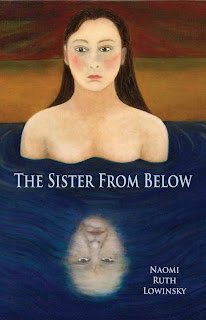 The Sister from Below: When the Muse Gets Her Way

The Sister speaks to all those who want to cultivate an unlived promise—those on a spiritual path, those who are filled with the urgency of poems that have to be written, paintings that must be painted, journeys that yearn to be taken…

Who is She, this Sister from Below? She’s certainly not about the ordinary business of life: work, shopping, making dinner. She speaks from other realms. If you’ll allow, She’ll whisper in your ear, lead your thoughts astray, fill you with strange yearnings, get you hot and bothered, send you off on some wild goose chase of a daydream, eat up hours of your time. She’s a siren, a seductress, a shape-shifter . . . Why listen to such a troublemaker? Because She is essential to the creative process: She holds the keys to the doors of our imaginations and deeper life—the evolution of Soul.

The Sister emerges out of reverie, dream, a fleeting memory, a difficult emotion—she is the moment of inspiration—the muse. Naomi Ruth Lowinsky writes of nine manifestations in which the muse visits her, stirring up creative ferment, filling her with ghosts, mysteries, erotic teachings, the old religion—bringing forth her voice as a poet. Among these forms of the muse are the “Sister from Below,” the inner poet who has spoken for the soul since language began. The muse also appears as the ghost of a grandmother Naomi never met, who died in the Shoah—a grandmother with ‘unfinished business.’ She visits in the form of Old Mother India, whose culture Naomi visited as a young woman. She cracks open her Western mind, flooding her with many gods and goddesses. She appears as Sappho, the great lyric poet of the ancient world, who engages her in a lovely midlife fantasy. She comes as “Die Ür Naomi,” an old woman from the biblical story for which Naomi was named, who insists on telling Her version of the Book of Ruth. And in the end, surprisingly, the muse appears in the form of a man, a long dead poet whom Naomi loved in her youth.

The Sister from Below is a personal story, yet universal, of giving up a creative calling because of life’s obligations, and being called back to it in later life. This forthcoming Fisher King Press publication describes the intricate patterns of a rich inner life; it is a traveler’s memoir, with outer journeys to Italy, India and a Neolithic cave in Bulgaria, and inward journeys to biblical Canaan and Sappho’s Greece; it is filled with mythic experience, a poet’s story told. The Sister conveys the lived experience of the creative life, a life in which active imagination—the Jungian technique of engaging with inner figures—is an essential practice.

The Sister speaks to all those who want to cultivate an unlived promise—those on a spiritual path, those who are filled with the urgency of poems that have to be written, paintings that must be painted, journeys that yearn to be taken…

Naomi Ruth Lowinsky is the author of The Motherline

: Every Woman’s Journey to Find Her Female Roots (2008) and numerous prose essays, many of which have been published in Psychological Perspectives and The Jung Journal. She has had poetry published in many literary magazines and anthologies, among them After Shocks: The Poetry of Recovery, Weber Studies, Rattle, Atlanta Review, Tiferet and Asheville Poetry Review. Naomi has three published poetry collections, Adagio and Lamentation

, red clay is talking (2000) and crimes of the dreamer. She has been nominated for a Pushcart Prize three times. Naomi is a Jungian analyst in private practice, poetry and fiction editor of Psychological Perspectives, and a grandmother many times over.

The cover image "Phases of the Moon" is an oil painting by Bianca Daalder-van Iersel, an artist and Jungian analyst practicing in Los Angeles, California. You can learn more about the artist and her work at www.bdaalder.com.