Most of the visitors to this blog know me only through the postings on Dreamwork, a lifelong passion, vocation and interest. I began life as an artist, before the training in Depth Psychology, and continue to create personal artwork. These have always been "dream-like" snapshots, and I thought to share one as a way of amplifying the scope of my comments on Dreamwork, Inner Dialogue, and the Creative Process. I had submitted a different drawing to the International Association for the Study of Dreams conference in Berkeley several years ago, in a similar process of bridging the domains. 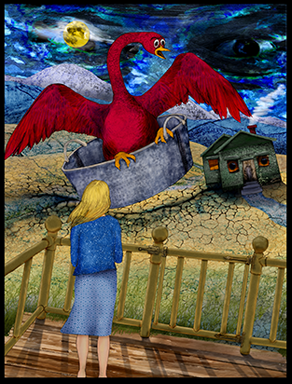 This particular image arrived in my consciousness more complete than most, but several months elapsed before I started sharing and printing out proofs. Recently I printed out the "Red Bird" image at full scale, (3'x4') and replaced an image on the wall with this one. For those who might have followed along, the title ended up being "All is askew, except for You." I have always created images as a form of dialogue with an Inner aspect of the Self, letting them inform me. I never intend, as best I can manage, but let the image surprise me and teach me what I am meant to know at the point of it's creation. It is always an evolving process. This particular image did not get printed after the initial "completion" so I was pleased to have it ask for a change before hard copy. There is a "blue path" moving off to the right to the "odd house" in the near distance. I had noted that there had always been a small piece of the same path, approaching the brass railing. The spontaneous question emerged, how do "I" move between "here" (present tense, current state of mind) to "there" the quirky house with it's mysterious portent?? The drawing was requesting a "gate," a means of transition and access between the domains. I know, fancy Depth Psychology language, for a spontaneous, intuitive felt need in a drawing, but there it is, a gate is now in the picture. Time to move on to the next picture, and let this one talk to me when it wants to from it's now ensconced place on the wall. It is a dialogue, and between dreams and drawings, and little felt words in my inner ear, me and my life long companion chat. Also, for those who have been watching, the outside twisted frame has been dropped, as it interrupted the discussion and felt superfluous?? For those who are keen on such issues, I often include both large and small scale dimensions to "my" images, as this feels correct when they are being created. So... step back from the screen, squint your eyes a bit and see if anything "jumps out." Our unconscious usually includes both levels, and then some.... it is open ended.