Individuation and Ghosts: A Study of the Plenaro Dream

‘The difference between the "natural" individuation process, which runs its course unconsciously, and the one that is consciously realized is tremendous. In the first case,  consciousness nowhere intervenes; the end remains as dark as the beginning. In the second case, so much darkness comes to light that the personality is permeated with light and consciousness necessarily gains in scope and insight. The encounter between conscious and unconscious has to ensure that the light that shines in the darkness is not only comprehended by the darkness, but comprehends it’. (CW 11, Psychology and Religion).

The following dream happened about January, 2013. I became lucid at an early stage, which in this case is relevant only in that it helped me to employ a strategy to achieve conscious dream goals, which paired nicely with the unconscious content. Such interactions between the two may be important expressions of individuation.

Lucid Dream: My wife, my son and I were living in a pole barn on some land. I noticed out the window, the neighbor looking at me. He had a hat and dark glasses on. He was taking delivery of a completed section of house to be added to his house. At that moment, it fell off the truck and rolled on the ground. I thought, we could complete our house this way, buying sections until we had a whole house.

I walked the land, a valley with hills to right and left. Before coming to a large house and yard, I came across two recently filled graves. Tripping a little as I moved between them, I stumbled across the right grave. I walked up the hill a little bit and looked down at them. They were lined with stone blocks around each grave and the earth was turned and black, as if ready for planting. It seemed like very fresh dirt. 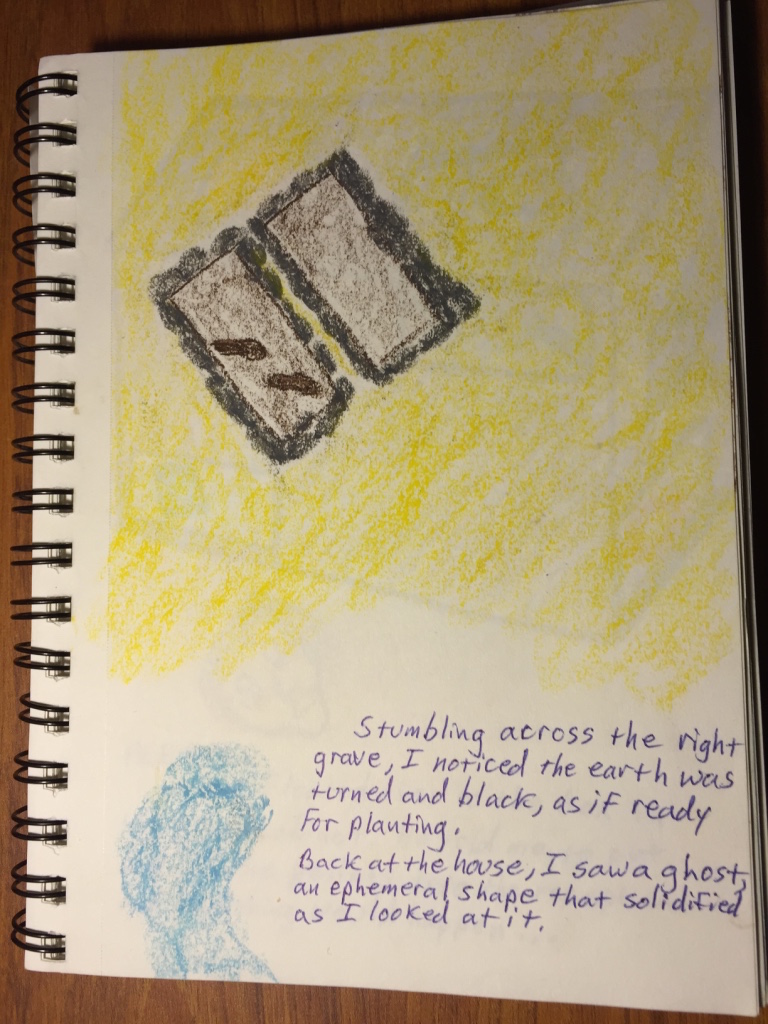 I went back to our house, careful not to walk on the neighbor’s property to get to mine. In the house, I immediately saw a ghost. An ephemeral shape appeared before me and solidified as I looked at it. We looked at each other. I said, “stay right there and let me look at you, so I can stabilize this dream and this image.” I did that, holding my arms out at a wide angle to frame him within my direct vision and started to have a conversation with a boy with blonde hair, looking about 10 years old who said he was a soldier in a war.

When I stabilized the image of the ghost, I became lucid in this vivid dream. I definitely intended to deepen and prolong this experience and it worked! I was asking him questions, some of which I now can’t specifically remember. Nobody could see or hear him but me. The neighbor was there, too. The ghost looked down and away from me in a thoughtful manner, not sad, as he told me his story. He said he was a soldier in a war and he had died. Though his gaze was downcast,  and he seemed to be seeing the finality of his life in this memory, he was not troubled by it. There was sunlight streaming down on him from the window.

As he continued his thoughtful expression, he floated back and almost into the cupboard with glass doors. In it was a box and his head was floating almost next to it. I asked him his name. He said it twice as I asked him to repeat it and I still couldn’t hear it. I felt that I had to know his name and in my urgency, I asked him to spell it. He said, “P L E N A R O”. Asking again, I confirmed this name as he spoke the letters again. 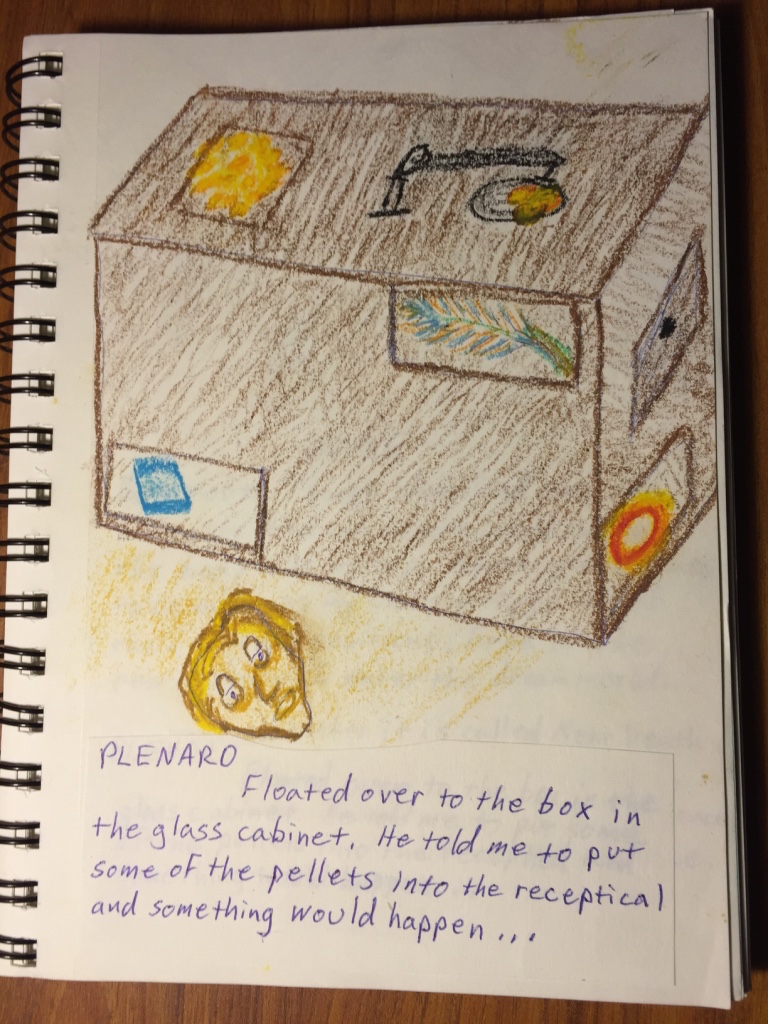 He mentioned the box, nodding at it or orienting toward it as he spoke. He directed me to take some gold pellets which were in a receptacle in the large square space on top, put them into another receptacle in the box and something would happen, like I would receive something. I could see that there were other compartments and as I was looking down through the box with x-ray vision, I saw a drawer and in it was a picture. It might be one of the things I could find but may not be what happened when the gold pellets dropped in.

The ghost Plenaro faded away and I couldn’t bring him back, even by calling his name. I woke up.

The archetypal figure of Plenaro must be a projection of the Self. I looked up the name, Plenaro.

This person is a “whole person”. I don’t know how I personally could have (unconsciously) come up with this name but there it is. The unconscious mind produced it and I captured it, bringing it into consciousness. Having been killed in a war, still having no regrets, the ghost really seemed like a whole person, who could look back on his life in a satisfied manner, so the name exactly fits the demeanor and attitude.

Plenaro was projected as a boy, about 10 years of age, but the feeling and the sense that I got was that he was only projected this way and was not supposed to be that age. That he was an adult, there was no question. The visual image that I got was of Plenaro as he looked down, maybe on one knee but I’m not sure, with sunlight streaming down on him from the window. He told his story as I looked at this image.

The neighbor, as a shadow aspect of myself, seemed to want to be present for the main action in the dream. I wonder if his participation and presence provoked the vision of the ghost, because I wanted to share the experience and include him in what happened, though he couldn’t see or hear the events.

I think there is some integration of the neighbor as a shadow figure becoming somewhat identified with Plenaro, who also doesn’t do things, or look at things, as I would. Seeing from this perspective, I look at my neighbor and myself in a new way. Myself, my neighbor and Plenaro seem to have much more in common, though the images of us may appear to be much different.

With his completed sections of house, the neighbor could still be the same person as Plenaro, who would seem so much different as he lay dying on his battlefield, and who didn’t appear to have built anything. Yet, it would please me greatly to live my life in this way, whether I would have a beautiful house to show for it, or to be swept up in circumstances beyond my control.

I have found myself wondering, “how would Plenaro feel about this”, or “what would Plenaro do about that?” (WWPD?) and it has helped me to reign in my focus. Many of the people I’ve looked up to in my life have not lived up to scrutiny, but the image from my dream has become somewhat of a role model for me in the time since.

As Plenaro indicated the box, I seemed to be distracted, more focused on the experience of a ghost than what he might have represented to me, making him spell his name. However, I become focused on the box. In the dream, I see a picture but when I drew the image of it, I put three other items into it. I don’t know the significance of any of them, from the picture in the dream, to the jewel, the ring, and the feather in my drawing. A jewel and ring might be symbols of the self, and would a feather be an instrument used by Anubis in the Egyptian ritual of Horus/Ani? There is a fourness here that may speak to the wholeness of the psyche, for what it’s worth.

I woke before getting to put the pellets into the receptacle, but I think the action would be a symbolic gesture. The gold pellets may represent what I may have gained from the dream, which can be used to fulfill my goals. I will always wonder what the picture portrayed, so I won’t speculate. The act of operating the box seems to be a possibility for future action, a way to move forward with the message of the dream.

A note about dreamsigns and lucid dreaming:

We dream of houses and sometimes they are haunted, as mine are. I used it as a dreamsign to overwhelming success, by remembering to reality check every time I encountered one. This time,

I brought another Haunted House dream to full lucidity. I deepened the dream and the apparition by stepping back, holding my arms back to take in the visual image and watched it fill into crystal clarity. This set the dream in motion, too. Though I forgot some dialogue, I woke immediately after and retained lots of detail for documentation.

‘The symbols of the self arise in the depths of the body, and they express its materiality every bit as much as the perceiving consciousness. The symbol is thus a living body.’ CW Vol. 9 The Archetypes and the Collective Unconscious