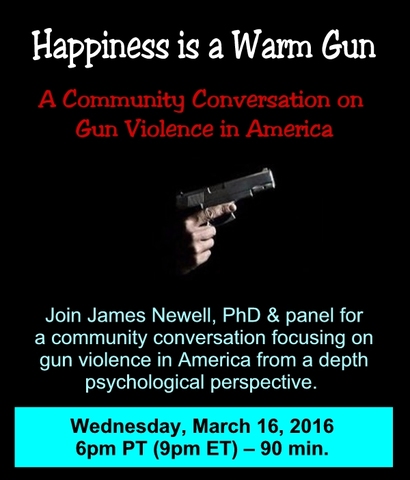 Last June the Depth Psychology Alliance hosted its first community conversation. The topic of this event was “What is Depth Psychology?” However, a few days before the event a young white man entered the Emanuel African Methodist Episcopal Church in downtown Charleston, South Carolina and murdered nine innocent African American worshippers in the middle of their worship service. This tragic act of violence, like so many mass shootings before it, was widely covered by the news media. As a result, our community conversation was dominated by our reflections on the confusion and despair that we all felt about this horrific, senseless, and racist act of gun violence. One result of that conversation was the development of our ongoing community conversation on racism: “The Souls of White Folk.” These conversations have been a wonderful resource, and a first step in addressing a pronounced lack of diversity in the depth psychology community in general, and in the Alliance in particular. Even so, since that early conversation we have also wanted to address another aspect of this traumatic event: the epidemic of gun violence in America.

Aside from the often repeated refrain that gun violence is a “mental health issue” (usually employed to deflect calls for stricter gun control laws), little if anything is ever said in mainstream culture about gun violence from a depth psychological perspective. If we do look at gun violence from this perspective, what do we find? What do these terrifyingly repetitious acts of gun violence say about the unconscious of our culture? When the same dream is repeated over and over, it seems clear that the unconscious has an urgent message to deliver. What is the message our cultural unconscious is delivering here? Is this another cultural complex? If so, what archetypes are activated at the core of this complex? Why is it that this phenomenon seems to be an almost exclusively male phenomenon? What is it about the male psyche that makes it so susceptible to the lure of guns and to the performance of acts of mass violence with guns?

My own point of view is that these events are instigated by a number of factors: personal, cultural, and collective, or archetypal. Our Depth Psychology Alliance president, Craig Chalquist, has produced a wonderful presentation on some of the personal factors that he’s observed when doing group work with violent men (see the links below). In depth psychology we also tend to look at historical patterns which support current complexes. That our culture, and our nation, were built upon acts of mass violence (often racially motivated mass violence) and that it was guns that typically tipped the scales in such conflicts, seems quite significant. Archetypally, it also seems clear that the negative side of the hunter/warrior archetype, a function that helped human beings survive for millions of years, seems to be highly charged and activated in these events. How is our culture neglecting, excluding, or otherwise not accounting for the positive side of this important archetypal hunter/warrior function?

If you find these questions compelling, or if you, too, are trouble by the explosion of gun violence in recent years, I hope you will join me, Alliance president Craig Chalquist, and others as we explore these questions and more on the epidemic of gun violence in America from a depth psychology perspective. Please join us on Wednesday, March 16, 2016 at 6:00pm PT. Bring your thoughts, hopes, ideas, grief, joys, success, and questions to this free community conversation event. This Depth Psychology Alliance community conversation is a live community discussion/webcast during which listeners will participate with a panel of interested persons as we discuss Depth Psychology and gun violence in America – and please forward this post to your favorite social media outlets and to interested friends!

Cycle of Abuse in Violent Acts

______________________________
James Newell, Ph.D. is an educator, coach/counselor, performing songwriter, and board member of the Depth Psychology Alliance. James teaches mainstream religious studies courses online for Central Michigan University and several other schools. James also holds master’s degree in counseling and theology from Vanderbilt Divinity School. James’ counseling orientation is Jungian, and his goal is to educate and empower others to do their own depth work, individually and collectively. James continues to pursue his own artistic passion through music, having begun his musical career working with such legendary musicians as John Lee Hooker, James Cotton, Jr. Wells, and Big Joe Turner.