How does that phrase land on your soul? Are you cheering the downfall of the fascist Trumpus (as I certainly am) and a step back from the precipice of irreversible climate change? Are you celebrating a return to “normalcy”? Or are you one of the millions of people who rejected him but apparently still supported his policies?

On 11/7 Biden was declared the winner – not officially, by the government, but by the four major media networks, who in our American mythology have asserted the superior moral function traditionally held by the clergy. On the 11th, I took a short walk around my Oakland neighborhood and saw twelve American flags hanging from front porches. Sure, it was Veteran’s Day, but most of them had been up for several days in a mass expression of that same mythology.

Republican corruption: The oligarchs were also celebrating something – their tax breaks, their complicit Senate and their captive judiciary – and it began to appear that they no longer have any use for their useful idiot. Fox News was the first network to call Arizona for Biden (days before the others) and refused to retract that decision even when Trumpus personally called Rupert Murdoch. Laura Ingraham announced that Trumpus should accept defeat “with grace and composure,” while Fox suspended the horrid Jeanine Pirro for insisting that the election had been rigged.

Republican leaders criticized his frivolous lawsuits and piously insisted that all ballots should be counted! Most seemed to be content with the results, but Newt Gingrich continued stoking the QAnon-fueled fires of hatred and anti-semitism. The election was “a left-wing power grab, financed by people like George Soros…”

The national state of anxiety will continue at least until December 14th, when the electoral college votes to certify Biden’s election. Prior to that date, all states must officially select their electors by December 8th. Until then, any state legislature (26 of them have republican majorities) can theoretically override the popular vote and appoint any electors they like.

Trumpus was keeping notions like this alive with over 130 fundraising post-election emails (by 11/10), along with demands for recounts and dozens of bogus lawsuits (15 in Pennsylvania alone), so as to maintain the charged emotional state of his supporters, who, despite their privileges, continue to see themselves as victims. And he was doing this not because there are any real possibilities of changed results, but because, a con man to the end, he can still soak them for more money, with half of all donations (in fine print) going to pay down his election debt. And, as David Cay Johnston writes, Trumpus 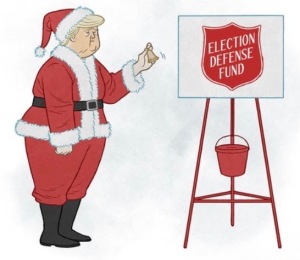 …will be in a position to exact revenge, a word that by his own account is his entire life philosophy... (through) firing officials, issuing pardons to friends and family and other acts Trump can do great damage between now and Inauguration Day, when his shield against criminal prosecution vanishes. He can also hobble the transition to a Biden administration.

However, everything changed by 11/8 when it became clear that both of Georgia’s Senate seats (and the Republican Senate majority) were still in play and would go to January runoffs. Republican leaders quickly reversed course and supported Trumpus’ refusal to concede, joining him in his attempt to arouse the faithful. On 11/10, Mike Pompeo announced, “There will be a smooth transition to a second Trump administration.” At least four Republican Senate and House candidates who’d lost by wide margins also refused to concede. The deluge of lies had its effect: 70 percent of Republicans now say they don’t believe the election was free and fair (up from 35% only two weeks ago).

Trumpus Jr., Florida Governor Ron DeSantis and others brought the con job out into the open by reminding Republican-dominated state legislatures that they can still override the popular vote in their states. Can these “faithless electors” really do this? Snopes fact checkers think not:

Any state’s legislature could, theoretically, pass a law setting out a new method for designating presidential electors other than popular vote. However, they would have to enact such a law prior to Election Day; they could not retroactively change, or just disregard, their current laws to defy the will of voters. State election laws and regulations must be established and in place prior to Election Day — they cannot be improvised or instituted on an ad hoc basis after the fact.

Republicans would have to get not one but many of the five Biden states with GOP legislatures to try to ignore the popular vote…Congress would also have a role to play deciding which electors to recognize, which gives the House Democratic majority some leverage. And it’s not clear that any of the maneuvers would hold up in court…

Snopes, however, adds a qualification:

… the law is only relevant to the extent that is it enforceable. If Republican-dominated legislatures were determined to flout their state laws regarding the designation of electors, and a Republican-controlled Senate were willing to facilitate the scheme, and a conservative judiciary were compliant in upholding the results, then such a plot might indeed succeed.

And if such madness were to reach the Supreme Court, it would encounter three justices who worked directly on the Bush v. Gore case that stole the 2000 election and led directly to the “War on Terror.”

Meanwhile, if the media are the moral gatekeepers of our society, the lawful gatekeeper is the nonpartisan General Services Administration, which is supposed to acknowledge the winner of the election and assist him financially in the transition. Its head, a Trumpus appointee, is refusing to do so.

But really, beyond the obvious moral and social justice issues and all the hard work and money spent, exactly why are people so emotionally moved at the possibility that Trumpus might steal the election? Perhaps the answer lies in the mythology of American innocence and the anthropology of American nationalism. Ever since the end of the Civil War, non-violent, rational, polite, good-natured acknowledgement of the transfer of power has been our quadrennial, ritual expression of our shared sense of national purpose.

At least for good-hearted liberals, who still maintain a naïve belief in the inviolability of our institutions (one of those institutions is education, and we’ll look at that in the next installment), to call the will of the voters into question in this manner is to question our entire identity. In this post-modern world, where ideology and grand narratives of meaning have mostly lost their att... just exactly who are we if not Americans, and who are Americans if we aren’t free and equal and if we don’t share our traditional democratic ideals and aspirations? Why, as believers in our national religion – Americanism – do we call ourselves patriots, unlike people in most other countries who use the more appropriate term – nationalists?

In their profoundly important book, Blood Sacrifice and the Nation, Carolyn Marvin and David Ingle write that Presidential elections are “contrived fertility rites of mating between the people and a leader” in which we periodically announce the rebirth of our democratic institutions, those social agreements that remind us of who we are and what makes us different from other people. The very fact of uncertainty “heightens ritual by investing it with consequence.” In this context, the flag

In Christianity the revivified totem is the risen Christ. In American nationalism the transformed totem is the soldier resurrected in the raised flag. On the basis of his sacrifice the nation is rejuvenated. As the embodiment of sacrifice, the flag has transforming power. Certain acts cannot be performed except in its presence. It must be kept whole and perfect, as holy things are…

…What counts for the survival of the group is what we will do in public on its behalf while congregants bear witness…The sanctity of national symbols is protected by treating them gesturally as sacred, even while we insist in language that they are not. And when the god commands it, we must perform the ritual sacrifice, war, that sustains the group.

I think it will be – a long time from now – an indication that this society has matured when we begin to see fewer national flags and more Earth flags.

Is there a sense of anxiety expressed in our flag display? Here’s one more quote of theirs, on the significance of proper election procedure:

The losing candidate is an immediate sacrifice. The inaugural includes the ritual death of the old king whose willing submission defines democratic procedure.

It’s nearly a week since the networks called the election for Biden. And now it’s been several days since Trumpus cranked up the anxiety levels once again by not only refusing to concede, but by (for his own reasons, of course) pointing out that the Emperor has no clothes (It’s rigged!).

Now it occurs to me that those flags around my neighborhood are not only gestures of celebration. Perhaps they are prayer flags.