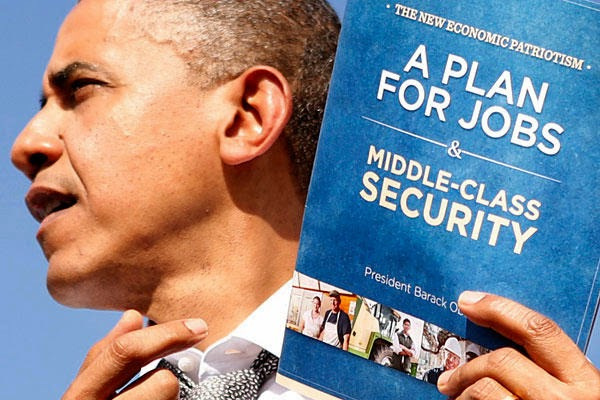 Our first responsibility as mythological thinkers is to cultivate discrimination, to take a step back and attempt to perceive the stories that are being played out in our culture, before we can begin to offer new ones. We must understand how we participate in those stories by our own willing – generally unconscious – acceptance of their primary themes.

I recently noticed a newspaper review (Grading the President) of yet another book about Barack Obama, and realized how much we all do this: give “grades” to celebrities and politicians, as if we were teachers or authorities.

It’s primary season: both sides pander predictably and shamelessly to their bases. The Republican Clown Car has optimized its seven-year liturgy of utterly demonizing him, while Hillary Clinton speaks of “furthering his advances” and Bernie Sanders, attempting to define a progressive alternative without alienating Obama, offers only the mildest of direct criticism. At further extremes – white supremacism on one end and anti-imperialism on the other, we find much stronger language.

We’ve all been grading the president since (and often before) he took office. To embody that role – the “grader” – is to have expectations. In the real world of politics, this position opens up many of us to the charge of being idealistic, impractical and/or unrealistic. In the world of depth psychology, perhaps all expectations are unrealistic, because they tell us more about ourselves than about the objects of our expectations.

Is it surprising that, encountering the subject of the presidency, we find ourselves in the world of myth, specifically the myth of American Innocence, and specifically the corollary of that myth – the degree of innocence – each of us holds to?

The mythopoetic approach looks at the stories we tell ourselves about ourselves. And this story is about the archetypal King and our expectations – our longing, our projections and our disillusionment. But it is also about history, the present (in a time of constant warfare and massive human suffering) and a very uncertain future. As I wrote in a blog  on this subject:

Every American president at least since Harry Truman, and arguably for much longer, has been faced with a unique political dilemma created by two conditions. The first is the reality of capitalist domination of politics: the President is essentially a spokesperson for the empire, not its ruler, not even the primary “decider,” as George W. Bush called himself.

The second is his symbolic role as king-figure. As head of state, he embodies the mythic figure of the king for his people. These two conditions require that he play two opposite aspects of the myth of innocence against each other.

As spokesman, he must continue at all times to amplify our paranoid fear of “The Other” so as to justify military intervention abroad and repression at home. In other words, he must manipulate the traditional white American sense of being the innocent victim, or at least the potential victim, of some dark (and dark-skinned), irrational, violent, predatory outsider.

As King-figure, however, his job is to absorb the idealistic projections of millions of people and convince them that his intentions (and ours) are noble, protective and altruistic. To do that, he must play the exact opposite of the victim, the Hero. He must reassure Americans of his – and our – ability to meet the threat and defeat it, while simultaneously bringing the Good Word of our compassion to those evil ones who would – for no apparent reason – harm us.

In discussing politicians, we inevitably encounter the frustrating gap between rhetoric and action, and I have consistently suggested that we look not at what they – especially presidents – say, but at what they actually do.

This perspective invites us deeper into mythic paradox. In myth, there is no difference between motivation and action. It simply doesn’t matter, for example, that Oedipus didn’t know that Laius was his father and that Jocasta was his mother. What matters is this: he slept with her and murdered him, and he blinded himself once he found out what he had done.

The King: To become whole, we need to take back our projections and know these archetypes as aspects of ourselves. But in our demythologized modern world, we are so wounded, and society has been so dysfunctional for so long, that we very rarely see such men – Gandhi and Martin Luther King come to mind – in the public sphere. And, too often we respond to their presence by re-enacting the passion of the Christ and killing them when we discover that they are human beings, not archetypal images of perfection.

And yet, our opinion of Obama usually assumes a judgment of his motivations as much as of his actions, and they often take a binary “good-bad” range, subject to other factors. Here is a potential range of grades, from right to left (minus the usual Republican bloviosity), or from innocence to experience, that covers most of our thoughts about Obama:

1 – Idealistic intentions, but thwarted at every step by a recalcitrant and racist Congress; innocently naïve about hardball politics, still trying to compromise even in year eight, when the Republicans have never been interested in anything but emasculating the very concept of government. Certainly, the lesser of two evils. How it could have been.

2 – Good intentions but utterly naïve about the deep state and the realities of power. Here we recall George Carlin’s old joke: On day one of the presidency – every presidency – Secret Service agents usher the new guy into the White House movie room, show him the Zapruder film of the Kennedy assassination, slowed down frame by frame, and tell him in no uncertain terms what will happen should he get out of line. Barack, we hardly knew ye.

3 – Good intentions but utterly naïve about his own complicity in American violence (even in year eight); the Obama who weeps for the victims of domestic gun violence as he directs mass violence abroad. The Tears of a Clown.

4 – Mild intentions, centrist in philosophy (as he clearly and publicly stated in 2007), timid in style, happy to serve the power elite, hoping only for incremental change. The Organization Man.

In Part Two of this essay I will imagine other grades.