It’s been two weeks since Day of the Dead, when the veil between the worlds was it its thinnest. But history continually insists that the veil can part at any moment, as it did for the hundreds of people killed and wounded recently in Paris. Apocalypse means “to lift the veil.” We suddenly see reality unadorned. This terrible tragedy has spawned peace vigils and spontaneous shrines in many cities across the U.S. and the world.

Anything we grieve for helps to open us to the great communal hall of loss, where we may discover how much more we need to release. This is both the gift of grief and its challenge. For whom do we weep today – the innocent victims, the Paris we may have once known, a world gone mad? Perhaps some of us grieve for something else: our own innocence and our own declining white privilege.

As readers of this blog know, I have written extensively on this subject. It’s a delicate but necessary one, and I encourage you to review some of my previous blogs, here, here and here before reading further.

Yesterday I opened Facebook and saw the countless posts of condolence, solidarity and empathy, especially the repeated request to “Change your profile picture to support France and the people of Paris.” I remembered all those who posted, “I am Charlie Hebdo” not so long ago.

I was moved by the heartfelt expression – and I was appalled by the blind innocence.

I hadn’t seen any similar posts just one day before, after the suicide bombing in Beirut that had killed over forty people and injured over two hundred. Where was the global empathy for the city formerly known as the “Paris of the Middle East” (or for the victims in the hospital we bombed in Afghanistan last month, or for the 550 children massacred by the Israelis last year in Gaza)?

David Swanson speaks of the disconnect: “We are all France. Apparently. Though we are never all Lebanon or Syria or Iraq for some reason. Or a long, long list of additional places.”

Chris Floyd writes that the American empire and its junior partner France are reaping what they have sown:

Without the American crime of aggressive war against Iraq — which, by the measurements used by Western governments themselves, left more than a million innocent people dead — there would be no ISIS…Without the direct, extensive and deliberate creation by the United States and its Saudi ally of a world-wide movement of armed Sunni extremists…there would have been no “War on Terror” — and no terrorist attacks in Paris tonight…the hellish world we live in today is the result of deliberate policies and actions undertaken by the United States and its allies over the past decades. It was Washington that led and/or supported the quashing of secular political resistance across the Middle East…

With no avenues for secular (read: democratic) resistance, all opposition to the American empire has long been channeled into religious fundamentalism, which encourages its believers to literally die – and kill – for God.

And does anyone wonder why the terrorists chose to attack Paris, rather than Rome or Athens, iconic European capitals that are far closer to their embattled countries? Would it not be that Italy and Greece have long abandoned their old colonial pretentions, unlike France and Great Britain?

But such tragedies – and the legitimate emotions they evoke – have other consequences. Always we have to ask: Cui bono? Who profits? Which militaries will now have increased funding and revenues? Which politicians will gain in the polls by demanding further intervention in these devastated regions? And whose boots will shortly be on the ground?

The generals would channel our grief and empathy toward those ends. But in Paris itself, there are people such as Charlotte Farhan, who refuses to change her FB profile:

…if I did this for only Paris this would be wrong. If I did this for every attack on the world, I would have to change my profile every day several times a day. My heart is with the world, no borders, no hierarchy, I hold every human’s life with value…Don’t be part of the “us and them” mentality which the war mongers want you to do!

This essay, however, is about privilege. White privilege.

Of course we all suffer from news or information fatigue, from hearing (if we listen) nearly every single day for at least fifteen years, and much longer for some of us, of the terrible news emanating from the Middle East. It’s easy to conclude that it’s always been that way over there.

And perhaps that fatigue leads us to make certain assumptions, that suicide bombings and massacres always happen there, rather than here. And perhaps some of us, in the old Protestant tradition of blaming the victims, even slide lazily into thinking that the victims deserve their own misfortune.

But for all their other differences, the essential point is that Beirut is an Arab city and Paris is basically white. Let’s not kid ourselves. Not that we shouldn’t empathize with Les Parisiens, but we do so because they look like us, and the people of Beirut don’t. So I have to add yet another quality of white privilege to the list: selective empathy.

Selective empathy involves the willingness to ignore reality, and it has two aspects in terms of our (white) response to news fatigue. On the one hand, we acclimate to the regular violence we perpetrate against people of color in the Third World and only feel sadness when white people suffer.

On the other hand, we react with wounded innocence when we hear of the latest mass shooting. We may even speak of toxic masculinity; obviously almost all of the shooters are male. But selective empathy allows us to ignore the elephant in the living room of American violence: despite the racial stereotypes, the vast majority of mass shooters over the past thirty years have been white. Have you ever heard a news announcer describe the shooter as white, even if he displayed the photo?

Have you ever not heard him not describe a suicide bomber as Muslim or Arab?

“Condolence” means “to suffer together.” Healing from the dissociation and alienation of our modern American experience means, at the very least, to expand our circles of empathy to include the Other. The violence will never end until we learn to suffer together.

And by the way, says Noam Chomsky, “Everybody’s worried about stopping terrorism. Well, there’s a really easy way: stop participating in it.” There's another image going around Facebook. I signed o 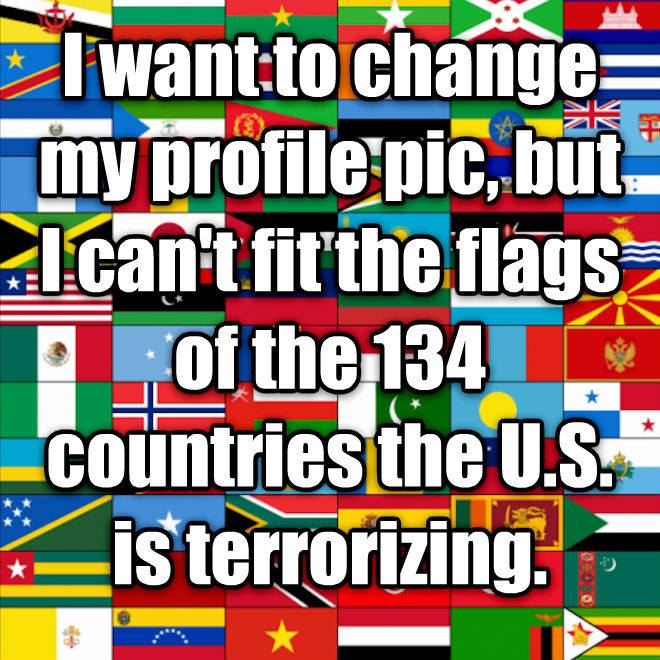