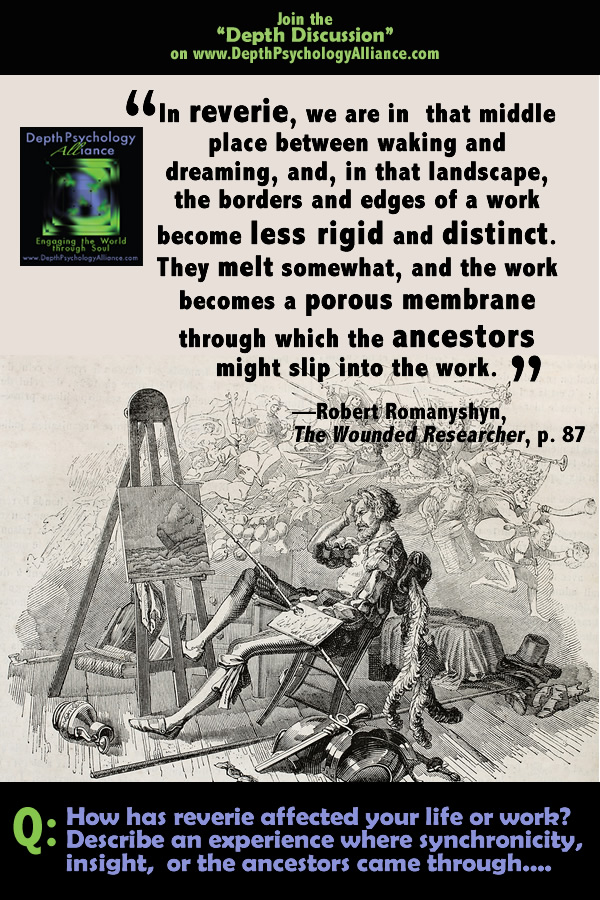 To allow reverie to offer its gifts, time must be taken. At least for myself, it often takes awhile for the immediacy of concerns to "melt" away so that reverie may speak and also so that I am able to perceive the message(s). In the open perceptual state, synchronicity, insight, and the ancestors are better able to be experienced and valued, at least in my case. Of course, sometimes synchronicity and the ancestors can "smack" us to attention but I would rather designate time to invite them into the room than their needing to beat the doors down. :)

I appreciate the quote and your response Ed. That image of opening the door rather than waiting for the pounding on its frame resonates for me--at least leaving the door ajar, makes sense!

Entering and inviting the waking dream helps me feel into this call to reverie by Romanyshyn: a call to allow the unconscious material, it's energy, creativity, and compensating impulse to enter the work. The more time I spend in using a Jungian framework for my life, the more I find myself creating some ritual space to honor the unseen and liminal movements of psyche.

I remember before I entered the depth psychological framework with any consciousness, there was a particlarly busy and chaotic period in my work and family life where i had a sense of no time--for anything. It was all allotted and filled up, used up. But...I needed a release valve. So on a daily drive I had I allowed myself just the tiniest liminal space in the form of a walk on a trail by a lake. I brought all the intention and focus I could muster before embarking on those walks to the work of shilding my consciousness from absolutely anything other than what was present on those steps on the trail. It was a life saver and many a time, after getting back into the car and plunging back into the whirlwind of external activity, I would turn to a moment or image from the walk it would save me from overwhelment and extreme stress.

Now that I've spilled that story of that little window of liminal space I allowed myself in those days, it appears to be a very tight and desperate, only perhaps marginal grasp at reverie--dream, wander or rave--but none the less a small restorative and I would say generative waking dream in those days that I think infused and saved the work.

Were the ancestors there? I'll have to think about it. Perhaps in the archetypal images and energy that was generated there in the path?

I won’t talk here about insights per se because I still need to assess their quality.

From the weekly poll: “How often do you deliberately allocate time to spend in reverie?” I’m pretty sure we’ve already been asked this question. It’s interesting how many ways and angles are equally good for talking or asking about the same thing. I’m glad to see in DPA the world of Jung’s (and other people’s) ideas coming into life. In everyday life one can see here and there people interested in this stuff, but examples (especially outside of psychotherapy) of making decisions and behaving according to daydreaming are rare.

There was a moment long time ago when I was going home and exited a bus. That indoor/outdoor change triggered something strange. The sun was shining differently, there was even something different in the air I was breathing. I don’t know exactly what, but I felt something intense and beautiful all around me. Sometimes when I walk a longer distance in a town with many people, something happens with the border between me and the surrounding. I feel then like a part, an organ. It’s like when you go out fast in a street full of people after watching a 3D film and when the space around you becomes fuzzy.

Permalink Reply by Deryn Semmes Winchester on November 3, 2013 at 9:27am

After learning how to access reverie easily by using the techniques I learned at The Monroe Institute, I now find that I can access this spot on demand to help with making decisions, choices, and letting wisdom flow through me. However, I find reverie almost a blissful state when it opens up in meditation or while awake and was not directed by my intention. To reach this point though I have found that you must be open to the experience. Each individual is open to different  extent. An experience I would like to share is one that happened while I was at a weekend workshop with Brandon Bays and meditating with a large group of people for peace in the Middle East. During this guided meditation, I became aware of hundreds of people lining up in front of me, making a walkway for me to go through. I realized that these people were my ancestors from many, many different ages and were all warriors, military, etc. They were recognizing the spiritual power I held and how they honored this "new" way of making changes in the world instead of killing. The insight then showed all of them laying down their weapons before them in honor of me. It was one of the most powerful, very real experiences I have ever had. I couldn't stop crying for a long time afterwards, which is always a sign to me that I had tapped into something very pertinent and honest.

Bringing this back for another round in honor of the upcoming (Feb. 5) webinar with Robert Romanyshyn (A Conversation Between a P...)....

Have you  given consciously given over to reverie, or fallen into it? What was its effect? I remember doing this naturally a lot as a kid...but not so much lately. Do we adults have the same capacity as children do?

Permalink Reply by Aleksandar Malecic on February 3, 2015 at 1:44pm

Filmmakers do have that capacity. https://www.youtube.com/watch?v=4pySXc-6GoU - Tideland trailer

Terry Gilliam: Great filmmaker. That guy definitely has access to something not everyone does.

You sent me down a trip down memory lane on YouTube watching movie trailers this morning, Aleks and I realized how much of the experience of movies I like is really induced by the music. For me, that's a great way to induce reverie and creativity....

Permalink Reply by Holly Esch on February 4, 2015 at 4:24pm
I don't know, when I think of reverie I think of Eponine's bittersweet song "On My Own" from the musical "Les Miserables." Miss America contestants used to love this song because it combined vocal gymnastics with the opportunity to emote tragically for the judges:

In the rain the pavement shines like silver
All the lights are misty in the river
In the darkness, the trees are full of starlight
And all I see is him and me forever and forever

And I know it's only in my mind
That I'm talking to myself and not to him
And although I know that he is blind
Still I say, there's a way for us

Things ended poorly for Eponine. From the perspective of economics the return on her investment was negative. Unless you can make the products of your reverie manifest themselves in real life you're still just a lonely street urchin wandering cold and barefoot through Paris.

Permalink Reply by Aleksandar Malecic on February 5, 2015 at 1:59am

I asked the servant Leo why it was that artists sometimes appeared to be only half-alive, while their creations seemed so irrefutably alive. Leo looked at me, surprised at my question. Then he released the poodle he was holding in his arms and said: "It is just the same with mothers. When they have borne their children and given them their milk and beauty and strength, they themselves become invisible, and no one asks about them anymore."

"But that is sad," I said, without really thinking very much about it.

"I do not think it is sadder than all other things," said Leo. "Perhaps it is sad and yet also beautiful. The law ordains that it shall be so." – Hermann Hesse, The Journey to the East

I think that we (could) live in interesting times, when we could analyze in a post-post-modern way what imagination and “the law” is made of. That is, if politics and the environment aren’t messed up beyond repair.

On the idea you-Holly Esch-pose, "Unless you can make the products of your reverie manifest themselves in real life you're still just a lonely street urchin wandering cold and barefoot through Paris."  Yes, over time, one is called to eventually bring the rich loam of reverie into the world.

One way to think of this is that reverie is in the realm of the feminine, being fluid, rich in possibility, at the borders of worlds; reverie eventually leads to a call for the balance found in masculine  embodiment.  To explain: This conversation was begun in conjunction with Robert Romanyshyn and Brian Tracy speaking for the cultivation of a poetic sensibility.  We might consider that Romanyshyn's forays into the space of reverie found expression in his new publication, Leaning Toward the Poet : Eavesdropping on the Poetry of Everyday Life.  Reverie is embodied, in this example, in the act of actually finding a poem (or collection of poems) framed within its own lines and presented in a public forum-Robert's book.  That's what I mean by masculine embodiment. None of us does well unless we move in harmony between masculine and feminine domains.  I speak more of this at maryharrellphd.com  Thanks Holly for your comments.

I like your quote shared here Mary and also your line of movement towards manifesting, embodiment, and taking actions upon receiving these numinous gifts from our jaunts into reverie. I often think, in almost comic terms of the anecdotes regarding Toni Wolffe's dedication to "doing something" about her patients' dreams. The image of her barring the door to her consulting room from the returning patient who had unwittingly avoided or forgotten to do something about the dream discussed in the last session is often a strong reminder to me and inducement to action. But, I would interject that the doing and embodying can also just be a ritual or ceremony acknowledging and enacting the image. Here of course, the action is for the sake of alerting the psyche that the image has been seen and received. It is said by some and experienced by myself, quite often, that if these strong images (with aspects of synchronicity and ancestral messaging) are not adaquately mirrored back in a ritual, psyche can continue sending its messages, and in the worst case begin sending them in the form of symptoms, external events, accidents and eruptions.

That being said, whether consciously or not, Romanyshyn's publication of "Leaning Towards the Poet" is as you say an embodied action that draws from the fluidity of reverie and gives form. In my way of thinking, the publication is a dramatic and significant ritual of carrying the images from the fluidity of the stream to the community, where the miositure and movement of the reverie can have a second life in its readers.

Appreciate the dialogue here and the immensely provocative conversation heard on the call.

Mark, thank you for interjecting the notion that ritual or ceremony can also be the response soul requires.  We know that soul understands the language of ritual, for her a preferred language.  In my psychotherapy  practice I am always pleased to see the gift that ritual can bring to a difficult situation, allowing us to bypass consciousness and still find healing.  This might be necessary, for instance, when the wounding is so deep that consciousness is not possible.   I so appreciate your response.