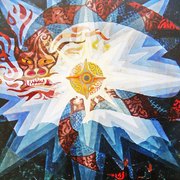 Our psychological work as human beings requires constant reflection on that which is visible in our collective. When social, political, economic times are at their worse, there remains an even greater inner call of spirit to respond to the unconscious self. The bridge between ego and unconscious requires ego strength, compassion, and a willingness to suffer. The spirit of the times challenges us with cultural and ethnic conflict as the spirit of the depths demands that we move inward to a deeper understanding of sustaining that which is immortal and archetypal in each one of us. We will explore and consider consciousness of ego—individual and collective, as well as the psychic, unconscious material of complexes and archetypes that influence our lives as human beings.

Depth Psychologist Carl Gustav Jung provided a significant contribution to the understanding and interpretation of dreams beginning with his own. Of particular inspiration for Jung were his dreams after his painful rupture with Freud in 1913. This external event contributed to Jung's psychological descent, his confrontation with soul, his "creative illness." His dreams, drawings, and active imaginations during this time period became the contents of Jung’s Black Books followed by The Red Book. As Jung's profoundly transformative inner life journey unfolded, a World War was simultaneously breaking out. Jung in his later years connected the two events. As we currently reflect on the spirit of the times and the depth of the times, Jung's design and theory of dreams and their interpretation is perhaps a critical necessity for mankind. The notion of attending to a dream practice as a political and ethical function is not a new idea. The Greeks commonly viewed dream activity as a civic practice. Awareness of cultural trauma has grown heavy on the shoulders of humanity. How might dreams help to inform and potentially serve as a healing agent during times of turmoil? This presentation will take up the topic with particular attention to the collection of dreams during WW2 Nazism by the German journalist Charlotte Beradt. The notion of dreaming is itself a practice of freedom and a practice of soul-making.